The homeopathic meeting in Odessa, October 2017 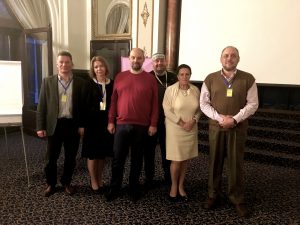 On the 13th and 14th of October 2017, an important event took place in the world of homeopathy – the next collegium of the Odessa Scientific and Homeopathic Society, the following people were invited:

The collegium was opened by the head of the Odessa Scientific and Homeopathic Society, Dr. Alexander Ivaniv, who conducted an information review of what is happening in different countries of Europe in the field of homeopathy, what impact the incorrectly provided information about studies in homeopathy had on the public. 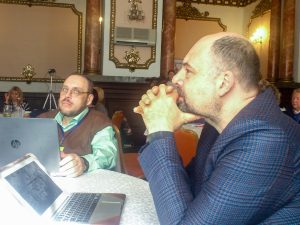 The second report was presented by Ilya Tiraspolsky, in which he spoke about the theory of miasms and the deep principle of homeopathic treatment, considering the development of latent psora. Understanding this miasm, gives an opportunity to reevaluate the therapy and find the right remedy. The report was deeply scientific, based on paragraphs of the Organon, confirming the correctness of such an algorithm of treatment on specific examples of case histories.
The third report was particularly informative and shocking. Online conference via Skype before the meeting was made by the doctor of medicine and philosophy Nonna Petrova from Bulgaria with the report “New in the world of homeopathy”. The lecturer told about new discoveries in science, and also explained the causes of attacks on homeopathy in recent years.
For more information on Nonna Petrova’s report, read here: https://homeopathy.lv/en/2017/11/01/dr-nonnas-petrovas-zinojums-jaunumi-homeopatijas-pasaule/ 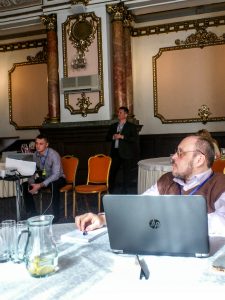 The fourth report was presented by Alexander Kotok, doctor of medicine and philosophy, historian of medicine for homeopathy, creator of the site 1796.
The use of gunpowder in homeopathic breeding as a useful remedy for various purulent skin diseases, noted that the medicine was undeservedly forgotten, and told the story of the origin of this remedy among homeopathic medicines, the way of application, and even in the field for warriors;
The fifth report is by Valery Lvovna Slepova, a paediatrician.
The doctor is not a homeopath and also believes that attacks on homeopathy are unfair and that “experts of homeopathy” are too categorical. In the practice of a pediatrician, there must be medicines that help to work safely with children. Shamsler salts are 12 salts, preparations used in homeopathy, and their peculiarity is that they are tropic to tissues, that means that the organism contains the same trace elements.
(Shousler’s salts are actively used by homeopaths and the prescription is strictly individual.) – T. Pokatova’s comment)
William Schwabe – the first established their production. It is now a huge concern of modern production. We decided on the production of the 1961 DHU German homoeopathic union of mono-component homeopathic preparations.
In Ukraine, they are allowed to work with them in all practices and not only homeopathic. Only their prescription relies more on the diagnosis, rather than being strictly individualised.
The metabolic syndrome is rapidly growing younger. Disorder of dyspepsia, it is not clear what to do about it and why they arise, say paediatricians.
An enzyme-deficient state is the exhaustion of the NS. Behaviour – increased excitability, sleep disturbance, fears, aerophagia, pilorospasm. They start talking at an early age, often with ADHD.
They were tried to treat “awfully!” (Paediatrician’s opinion). The mother has go to all kinds of specialists, and they all prescribe something. The child suffers from digestive disturbances and severe obstruction.
Treatment of such a disorder in the United States costs $ 17,000, but knowing the action of Shousler’s salts, paediatricians have long used homeopathic salts to treat such children, sodium and potassium salts, with great success and the cost of such treatment is very minimal, not to mention that there is no side effects and recovery occurs with the prospect of remarkable health. So in the practice of a paediatrician’s doctor homeopathy is applied, and paediatricians admit that many disorders do not respond to other treatment. 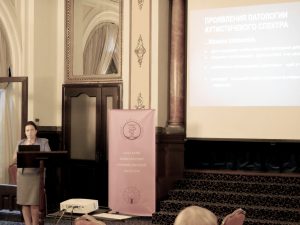 Sixth report from invited lecturer Dr. Tatyana Pokatova, Riga, Latvia. The main idea in the report on the topic of “autism spectrum disorders and the possibility of treatment with classical homeopathy” was that children with autism should be identified as early as possible for more successful treatment.
The most frequently used remedies for the treatment of autism, as well as, diagnostic criteria, the causes of such a pathology and the prognosis of the future of such children, depending on the depth of pathology and timely treatment were considered.
It was shown how quickly sick children react and give positive progress in the prescription of an exact homeopathic medicine: children begin to speak, become more calm, adapt better in society, etc. within a short time, however the full course of treatment can be longer.
In the evening there was a warm meeting of colleagues for a glass of champagne and congratulations to Dr. Natalia Baranovskaya in relation to the publication of a new book “Kaleidoscope of” small “remedies” and many, many, many thanks to Dr. Ivaniv as the organiser of this wonderful meeting of professionals. The snack was served and the famous stuffed carp, as in Odessa they say “ryba-fish!” (fish-fish!) Who can understand them, Odessites?!
On the 14th of October, the second day of the collegium began at 9.30 (Riga time and Odessa time are the same) 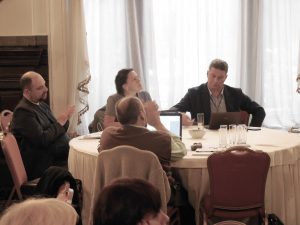 Dr. Lyubov Rozhko (USA) reported on a constitutional prescription and a catamnesis in Homeopathy, also presented cases from practice.
The next report is from Dr. Andrey Samofal, the head of resuscitation, was very serious. “On the possibilities of homeopathic correction of exfoliating aortic aneurysm in the conditions of a cardiological clinic”. The doctor told about the complexity and transience of this pathology, and yet, if it is possible to find the correct homeopathic remedy, the wall of the vessel, like other tissues strengthened.
The causes of an aneurysm are not clear, but with early diagnosis, many people can be saved before the rupture of the vessel tissues.
After a coffee break, the doctor of medicine and philosophy, Professor Alexander Kotok, showed us the amazing pages of the history of homeopathy, told about the life of many famous homeopaths, in particular about Dr. Yar, about the formation of homeopathy in Russia, about the personal characteristics of some homeopaths. The lecture was exciting, informative and interesting.
Alexander Kotok is not only a great historian of homeopathic medicine, our contemporary, but also a great lecturer, who captivates with his story and leads us into history, into the past. And as you know, there is no future without the past.
Dr. Ilya Tiraspolsky continued his speech from the first day, told about sanogenesis and explained the principle of the algorithm of treatment, when treatment does not progress.
Tatyana Pokatova in the next report reminded of the Great Teacher S. Hahnemann, who discovered not only Homeopathy, but did much more for humanity, for example, the regulations of pharmacies has survived to this day, which S. Hahnemann proposed, and “poisons” in them are released strictly under signature and registration. This is strictly maintained to this day.
In the lecture there was much talk about the amazing world of substances that have another side of the coin, if they are tested according to the rules of Hahnemann, then a huge world opens before us, the world of the mystery of matter. All substances have a secret, but how to find out about this, we were told through the writings of the immortal S. Hahnemann. The mystery of the action of the substance is as mysterious as love, which arises as if from nowhere and it is not clear how, but this miraculous influence changes everything in the body. The action of a homeopathic substance is mysterious, like love, and both of them make a person more beautiful, stronger and healthier.
The last speech on the topic “Evidence-Based Medicine and Homeopathy” was from cms. Sergei Nikolayevich Gusev, in which the author spoke about the power of the homeopathic salt of mercury.
At the end of the collegium there were pleasant minutes of recognition and rewarding, awards and pleasant gifts were given to lecturers and guests.
Sincere thanks to Alexander Petrovich Ivaniv for the excellent organization, the wonderful venue – the Londonskaya hotel, and the friendly and warm atmosphere. A great opportunity for professional communication!
On 10/20/2017 Alexander Ivaniv was 50 years old, and all the homeopaths of the Centre for Classical Homeopathy in Riga and friends of our centre congratulate the doctor-homeopath with this jubilee! We wish him health and happiness, success in work, true love from real friends!