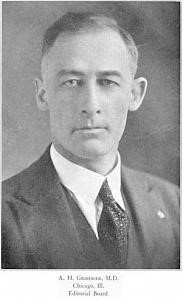 Arthur Hill Grimmer was born on August 29, 1874 in California. He grew up and was raised in a large, commoner American family that was treated with homeopathy. His father had a small homemade set of homeopathic medicines. So, from an early age, the boy was familiar with homeopathic remedies. Already at the age of 7 years (1881) little Arthur knew by heart the indications for using 60 polychrests. “By the time I was seven years old, I knew most of the symptoms of these sixty remedies by heart, and at this early age I had a desire to become a homeopath.” Dr. Grimmer actually cured several people at the age of eight. His childhood was not cloudless. He was the eldest of nine children, and his rather quiet early childhood changed dramatically when the family moved from San Francisco to northern California, where his father acquired 160 acres of land.

The next twelve years turned out to be quite severe and filled with risk; this was due to a multitude of difficulties and problems. “There was little money, and the food was very poor, but children’s games, wild berries and fruits were abundant. With a small amount of flour, corn grits and coffee with sugar, we were able to survive the first years of serious difficulties and hardships, and later we were able to acquire some kind of chickens and other poultry, as well as several pigs and cows.”

“We have learned to cope with the vicissitudes of changing weather.”

After the second year of life on the farm, his father experienced a terrible accident that left him disabled, and the young Arthur had to support a large family.

At the age of 14, the future homeopathic doctor was forced to leave the farm in search of work. He hired seasonal workers at farms and mines. It brought in eight dollars a month, plus lodging and food.

Fortunately, his father was an educated man who had a large library, which the future doctor Grimmer also enjoyed. My father believed in homeopathy and, with the help of sixty polychrests and Dr. Johnson’s desk reference book, skillfully coped with diseases in his family. It was good luck for young Arthur Grimmer …

Obviously, he had a wonderful foundation and clear advantages for studying homeopathy at the very beginning of his life journey.

As a teenager, in the mountains, the future homeopathic doctor met Dr. J. Hoffman, who could be his mentor. Dr. Hoffman saw in the young man great abilities and, perhaps it was he who played a role in the final choice; Grimmer entered the Goering Medical College in Chicago in 1902 (28 years) and graduated in 1906 at the age of 32 years. He studied on the course with James Tyler Kent, becoming the favorite student of the latter, and later the secretary and close friend. From Kent, Dr. Grimmer first learns about the teachings of Emanuel Swedenborg. Philosophical writings

“The Swedish prophet” will change the homeopathic practice and life of Grimmer.

Arthur H. Grimmer worked closely with Kent, assisted in drawing up the repertory, and also taught in college when Kent was busy.

“To my penultimate course, I made such progress in my studies, learning Materia Medica, studying the repertory and philosophy that the doctor (Kent) entrusted me with small quizzes, which I did before I graduated from my college course.”

“Kent lectured both freshmen and senior students, and my rather unusual job as an “examiner” was accepted by them, to my surprise and satisfaction.”

At this time, Dr. Kent’s health was seriously affected; at the same time, he was working on creating a repertory, taught and continued to accept patients. Such activities caused serious damage to his vitality and part of the lectures, examinations and the main patient reception at the Hahnemann College’s Saturday clinic in Chicago were handed over to Arthur Hill Grimmer.

“For me, then still a student, it became a real test, and I did my best to withstand the exam. Dr. Kent, faculty and college students were very pleased with my work.”

In 1906 (32 years old) Grimmer opened his medical office of a homeopathic doctor. There is evidence that after the death of Kent, many of his patients continued treatment with Grimmer.

Dr. Grimmer spent more than 50 years in Chicago practicing private practice and teaching his favorite homeopathy and in 1953 took over as president of the American Institute of Homeopathy.

During his long career, Dr. Grimmer has not published a single book, but he has written 200 articles: 29 of them are devoted to homeopathic Materia Medica, 73 to the study of various homeopathic remedies (including Gnaphalium). He was a specialist in the study of cadmium and its salts, actively used them in the treatment of cancer. 19 of his works are devoted to this. Dr. Grimmer suggested that he had cured several thousand cases of cancer in his career.

In his work, Dr. Grimmer actively spoke out against water fluoridation and vaccination, and condemned the use of high-speed pharmaceuticals:

“In the treatment of chronic diseases, the work of a doctor is associated with many serious problems that require study, patience and an unlimited faith in the power of similarity; these are always more or less atypical when we rarely find the typical manifestation of a single test.”

“In recent years, the course of chronic diseases has been seriously complicated and entangled by the numerous and constantly growing abuse of coal tar and antibiotics that have flooded mankind today.”

“Over the past ten years, all these misfortunes have intensified in the most disturbing manner. The harmful effects of processed and counterfeit products are added to the harmful effects of universal drug use; vegetables and fruits are treated with poisonous sprays, drinking water is polluted with harmful chemicals all over the world, aluminum cooking utensils slowly but surely create a pathological residue in the body, which leads to the emergence of many forms of degenerative diseases.”

“All these destructive components not only suppress the vital forces, but also inhibit the action of homeopathic remedies. And as a result of this, obstacles to successful homeopathic appointments multiply.”

In 1995, Dr. Ahmed Karrim collected and published all of his work in a book called The Collected Works of Dr. Arthur Hill Grimmer.

The diagnosis is made on the basis of a biopsy and a clinical picture.

Wounded and swollen were not only gums but the entire affected part of the face was extremely bloated, representing the so-called “frog face”; cervical and hypoglossal lymph nodes were enlarged, and the patient could hardly open his mouth to the size of a pencil. Family history was very good and unremarkable; before this case the patient possessed good health, did not suffer from infectious and sexually transmitted diseases. There were no clear symptoms needed for homeopathic purposes. If only the recent surgical trauma due to tooth extraction followed by curing and scraping bone fragments from the jaw could serve annoying factor.

After radiological and X-ray examinations, the dentist, who also observed this case, proposed a more extensive surgical operation. But the patient refused this on the advice of the family doctor, who, not having enough symptoms for the appointment, sent the patient to me, to choose the right means for the patient. Symphytum Officinalis has become the right tool. Taking it in the potencies of YM and 5th with an interval of one to three months, the patient was completely cured within one year. In the continuation of this case, I was informed about recurrent sinusitis, fairly mild, bearing a cold character. For their treatment since September 11, 1939 Carbo Veg was appointed. The remedy was administered in a series of potencies from YM to 50M with the same time intervals, the last dose was taken on April 1, 1940. At the moment, the patient returned to his doctor, who referred him to me, being completely cured in two years. This case is an example of a classic homeopathic treatment with a single remedy given in a series of potencies at appropriate intervals. Unfortunately, we see relatively few such successful cases.

Miss D., August 12, 1929. Breast cancer, ill for two years, the diagnosis was confirmed by a biopsy. Proper homeopathic treatment was carried out, but still a third of the breast was removed, the patient lost weight, was pale, experienced slight pain. With continuous treatment with precisely selected remedies (this is also mentioned in the case of another homeopath), the patient remained active for eleven years. Her chest did not hurt, but her bones became weak and brittle, an X-ray showed cancer. A number of drugs have been affected by the action, the first of which were Cadmium Iod and Cadmium Met., Then Alum. Silica, Graph, and last resort Kali Thio …, the patient’s breasts healed completely and stopped hurting, but because of the weakened bones, she needs to have a very calm lifestyle and avoid any kind of physical exertion. This is a case of advanced cancer, when there are already profound changes in the blood and tissues; rarely there is one remedy that can fight such a disease, in most cases a number of deep constitutional homeopathic remedies are required, and they will be the best choice for the patient. The more cancer cases I see, the more I become convinced that the greatest benefit can come from prevention, treatment of precancerous conditions by carefully thought-out homeopathic prescriptions, especially in children and young people. Another thought that should inspire all homeopaths is the possibility of the wonderful advantage that the homeopathic method gives. If you apply true homeopathic treatment consistently in three generations, then it can be a real blessing for the whole race!

One of the things we can do for future generations is to unite our patients, thinking about the future, patients and homeopaths to create a homeopathic community, and then, perhaps, happier and healthier children will come to this world!

IS IT NOT A BEAUTIFUL REASON TO BECOME A HOMEOPATH?

I wanted to get up and tell about an old lady approaching its eightieth birthday.

Nine years ago, her tooth ached, but she did not go to the dentist.

At seventy-one, she was very proud that she still had her teeth, but she developed a tumor that seized the entire lower jaw. Her face was extremely swollen.

I remember that in her case, Silica became a similar remedy, and I had to keep the patient from surgical intervention for a long time due to the opposition of the family, which insisted on removing the lower jaw. We cleaned everything with one single remedy – Silica. Now, nine years later, she is still well.