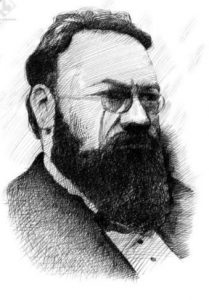 Since 1872 was a British orthodox physician who converted to homeopathy.

James Compton Burnett worked at the London Homeopathic Hospital and in private practice, and he succeeded Edward Barton Shuldham as Editor of The Homeopathic World,

James Compton Burnett was the homeopathic physician of Lewis Carroll,

James Compton Burnett’s first wife Agnes was the daughter of homeopathic pharmacist Edward Thomas. They had six children together. Burnett was also a great uncle of Marjorie Grace Blackie,

Burnett was born in Redlynch, England in 1840. He attended medical school in Vienna in 1865, where he remained 2 additional years studying anatomy, receiving a gold medal for his accomplishments in that field. “Passing through a brilliant examination in anatomy, lasting one hour and a half, the professor shook hands with him, saying that he had never examined a student with so brilliant and thorough a knowledge of anatomy.”

He graduated from Glasgow in 1872, and completed an internship for his MD degree at Barnhill Parochial Hospital and Asylum in Glasgow in 1876.

His friend and colleague converted Burnett to homeopathy during his internship, Alfred Edward Hawkes. He was contemporary with Richard Hughes, Robert Ellis Dudgeon, and John Henry Clarke.

In addition to the influence of homeopathy in his work, Burnett was highly inspired by a contemporary of Samuel Hahnemann‘s, Johann Gottfried Rademacher…

He studied homeopathy in Liverpool under John James Drysdale and Edward William Berridge, at first very secretively for fear of reprisals from allopathic colleagues.

Burnett was a great uncle of Marjorie Grace Blackie, and a great stimulator of interest in homeopathy, He was also an ‘Organ prescriber’ and supporter of Johann Gottfried Rademacher.

It was Richard Hughes‘ book, A Manual of Pharmacodynamics, the first authoritative homeopathic textbook published in English, which had recruited Burnett himself and practically the whole of Burnett’s generation of rising young homeopaths in Britain.

Harris Livermore Coulter page 82: In 1890, homeopath James Compton Burnett published 54 cured cases of tuberculosis in Five Years Experience in the New Cure of Consumption by Its Own Virus, treated with a remedy prepared from tuberculous sputum called Bacillinum, which included a critique of Robert Koch‘s ‘crude dilutions’, pointing out the ‘aggravations‘ Robert Koch‘s patients had suffered, plus an explanation of homeopathic philosophy of aggravations as part of the curative reaction of the Vital Force.

Along with other nosodes, he introduced the remedy Baccillinum. A prodigious writer he published over twenty books in his lifetime… John Henry Clarke, Robert Thomas Cooper and James Compton Burnett together formed the ‘Cooper Club’.

This regular meeting of leading British homeopaths was the source of many of the symptoms in John Henry Clarke‘s Dictionary of Materia Medica. John Henry Clarke says of Burnett, “…during the last twenty years Burnett has been the most powerful, the most fruitful, and the most original force in homeopathy”…

Burnett was a prolific writer and he wrote numerous books and small pamphlets about diverse aspects of homeopathy, Natrum mur as a Test of the Doctrine of Drug Dynamization, Curability of Cataract by Medicines, Tumours of the Breast and their Cure, Fifty reasons for Being a Homeopath, Five Years Experience in the New Cure of Consumption by Its Own Virus, Curability of Tumours, Diseases of the Spleen and Their Remedies Clinically Illustrated, The Change of Life in Women and the Ills and Ailings Incident Thereto, On neuralgia, Diseases of the skin from the organismic standpoint, The Greater Diseases of the Liver, The Diseases of the Liver, On Fistula and Its Radical Cure by Medicines, Enlarged Tonsils Cured by Medicines, Vaccinosis and Its Cure by Thuja, Delicate, Backward, Puny, and Stunted Children, Gout and Its Cure, The Medicinal Treatment of Diseases of the Veins, Organ Diseases of Women, Gold as a Remedy in Disease, Ringworm: its constitutional nature and cure, Best of Burnett,